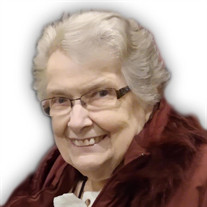 Alta May Held, 89, of Mason City, died Monday, February 28, 2022 at Good Shepherd Health Center in Mason City. A funeral service will be held 11:00 am Tuesday, March 8, 2022 at First United Methodist Church, 119 S. Georgia Ave., Mason City with Rev. C. A. Kress officiating. Burial will follow in Memorial Park Cemetery, Mason City. Visitation with viewing will be held Monday evening, March 7 from 5:00 pm until 7:00 pm at Hogan Bremer Moore Colonial Chapel, 126 3rd St NE, Mason City and will resume one hour prior to the funeral service at the church . Should friends desire, memorials may be left in Alta May’s name in care of her family. Alta May Scarrow was born on September 23, 1932 in Plymouth, IA, the daughter of Marion and Clara (Pencook) Scarrow. She was raised in Plymouth alongside her four sisters, Pauline, Phyllis, Shirley, and Dorothy, and attended Plymouth High School, graduating in 1951. Following her graduation Alta May began working at Northwestern Bell Telephone Company in Mason City as a clerk. Alta May remained a faithful employee of Northwestern Bell for 33 years until her retirement in February of 1986. On March 18, 1954 she was united in marriage to William L. Held in Mason City and together they would be blessed with three children, Gregory, Eric, and Lisa and 45 years of marriage. Alta May stayed very active within her community throughout the years, she was involved in the Telephone Pioneers, P.E.O. and was a faithful member of First United Methodist Church where she was a member of the Ruth and Lydia circles, and the bell choir. She enjoyed sports and loved bowling throughout her entire life, and cheering on the Minnesota Twins and Creighton Bluejays, as well as the Iowa and Iowa State basketball teams. Following their retirement, Alta May and Bill moved to Warsaw, MO. in 1993. While living in Warsaw, Alta May was active within the Alpha Gamma Alpha and Beta Sigma Phi sororities, the Warsaw Matrons, the Red Hat Society, and Circle A. She and Bill were members of Warsaw United Methodist Church. Alta May also filled her free time by working at the Senior Citizens Center and cooking at the Lion’s Club. In their years together, Bill and Alta May enjoyed traveling across the United States and spent time together fishing, antiquing, trap shooting, and playing cards. Those grateful in sharing in her life are her children, Greg (Patty) Held, Mason City, Eric (Leslie) Held, Indianola, and Lisa (Chad) Loreth, Milford; her beloved grandchildren, Matt Held, Josh (Kailey) Held and their children Kane and Alivia, Cameron (Liz) Arnold, Kaylee (Nick) Arnold, Mackenzie Held and her son, Greyson, and Brady Held; and her sisters, Shirley Snell and Dorothy (Dave) Baumgartner; brother in law, David (Dottie) Held; and many, many nieces and nephews, as well as extended family members and many friends. Alta May is preceded in death by her parents, Marion and Clara Scarrow; husband, William “Bill” Held; in laws, Lloyd C. and Mabel Fern Held; sisters, Pauline (Kenny) Chapin and Phyllis (Vernon) Helwig; and sisters and brothers in law, Dean Snell, Virginia (Lee) Doty, Darlene “Peg” Held, and Tom Held.

The family of Alta May Held created this Life Tributes page to make it easy to share your memories.

Send flowers to the Held family.