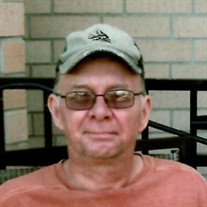 Allen B. Dobson, 63, of Mason City, Iowa, formerly of Bagley and Crosby, Minnesota, passed away Friday, April 9, 2021 at Heritage Care Center, Mason City. Al was born on August 15, 1957, the son of LaVerne and Joyce (Johnson) Dobson of Bagley, MN. He graduated from Bagley High School, class of 1975. Al worked for Anderson Brothers Asphalt Company in Brainerd, MN for sixteen years. He was a self-employed floor finisher in Northern Minnesota, until his health declined. On August 2, 2008, Allen married Barbara Nelson in Crosby, MN. He was an avid hunter and fisherman, who enjoyed the great outdoors. Al will be sadly missed by his family and friends. Those who are left to cherish memories of Allen are his wife, Barbara Dobson; step children, Sarah (Dave) Goodman, Elizabeth (Mark) Nelson, Eli Nelson and Anna (Joshua) Rosenberg; two grandchildren, Madelynn and Nolan Rosenberg; brother, Vernon (Diane) Dobson; niece and nephews, Jolienne Dobson, Dustin Dobson and Durand Dobson, as well as many relatives and friends. Allen is preceded in death by his parents and other aunts, uncles and cousins. Per Allen’s wishes, he has been cremated and no service will be held.

The family of Allen B. Dobson created this Life Tributes page to make it easy to share your memories.

Send flowers to the Dobson family.