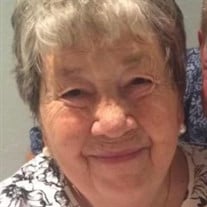 Alice J. Barner, 84, passed away Saturday, June 19 at Tidewell Hospice House in Bradenton, Florida surrounded by her children. Alice Jean was born on Februray 6, 1937 in Des Moines, Iowa, the daughter of Bernice and Edison Carder. The family later moved to Manly, Iowa, where Alice was a graduate of Manly High School. Alice met her husband, Robert “Bob” Barner while employed at Damon’s Department Store in Mason City, a store owned and operated by Bob. The couple resided in Mason City where they raised four children. During her time in Mason City, Alice was a member of the First Presbyterian Church and the Mason City Country Club where she could be found playing golf or participating in one of her many bridge clubs. Alice had a passion for many things in life including cooking, traveling, gift giving, sending greeting cards for every occasion, and entertaining. For many years Bob and Alice considered themselves “snowbirds” and spent winters in a home they built in Bradenton, Florida. Eventually they made Bradenton their permanent residence where they enjoyed hosting and entertaining family and friends from Iowa, time spent on the beach, and going to the casino. Later in life, Alice began a part-time job at McDonald’s where she enjoyed being a member of a hard-working team, interacting with customers, and soon became lovingly referred to as “Granny McMuffin.” Alice will be fondly remembered for her sense of humor, quick wit, outstanding cooking skills, thoughtful gift giving, and love of family. She loved fiercely and unconditionally. Alice is survived by her four children, Dale Barner, Dru Ann (Ken) Pettifer, Allison (Kent) Stevenson, and Adam Barner. She is also survived by 10 grandchildren and 6 great grandchildren. Survivors also include siblings Diane Judd and Jerry Durner. No service is planned. Rather the family requests you honor Alice by doing something kind for someone else in her memory. If so desired, memorials may be directed to Hospice or any organization of the donor’s choosing. It is hard to forget someone who gave us so much to remember, therefore, the family encourages people with memories of Alice to share them with the family by writing them down and sending them to 935 South Rhode Island Ave., Mason City, Iowa, 50401 in care of Allison Stevenson. You are also encouraged to share memories electronically by joining the Facebook group, “Celebrating Alice Barner.” Our goal is to keep the memory of Alice alive for her grandchildren and great grandchildren by compiling a collection of memories. We know there are a lot of memories out there as Alice touched so many lives during her time on earth.

The family of Alice J. Barner created this Life Tributes page to make it easy to share your memories.

Send flowers to the Barner family.