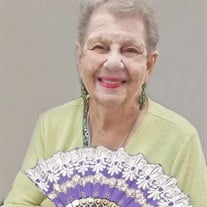 Agnes J. (Falgitano) Garner (91) of Mason City, IA passed away on November 25, 2020 at MercyOne North Iowa Medical Center. She was surrounded by the love of her 6 daughters. A memorial service will be held in summer of 2021. Agnes was born October 15, 1929 in Seattle, WA to Salvatore & Lillian (Thal) Falgitano. She graduated from Holy Rosary HS in West Seattle, WA. She moved to Mason City, IA in the Fall of 1959. She met her Love, Warren Garner in 1962 and after 10+ years of "dating" they married on March 26, 1973 -- thus formally uniting their family of her 6 daughters and his 2 sons. Agnes had various waitressing jobs but was most remembered as "Aggie" from Buehlers Cafe where she worked for 11 years. She was housekeeper/care taker for Father Bill Holzer for 18 years (moving to whatever Catholic Church he was assigned to) until he passed away in April 1998. Father Bill and Agnes (mom) were also part of the Lions Club and she enjoyed all the activities and travels that that participation provided them. She moved back to Mason City shortly after he passed. Left to cherish her memory are her 6 daughters -- Francine(Joe) Henry, Renton, WA; Audrey Escherich, Maple Valley, WA; Mona (Don) Meade, Mason City, IA; Roxanne (Pat) Ropella, Mason City, IA & Henderson, NV; Laura (Tom) Schultz, MasonCity, IA; Della (Jeff) Hauge, Urbandale, IA; daughter-in-laws Kimberly Garner, Mason City, IA & Deb (Brian) Lindsay, Nora Springs, IA; 29 grandchildren, 43 great-grandchildren (& one on the way) and one great-great-grandson. Her sister Madeline Jorgensen, Kennewick, WA and brother-in-law Ray Robinson, Renton, WA; and several nieces & nephews. She was preceeded in death by husband Warren Garner (1975); parents Salvatore & Lillian (Thal) Falgitano; her brother & his wife Sampson (May) Hull; sister & her husband Frances (Leroy) Hokensen, & sister Marie Robinson; step-sons Roger "Radar" Garner & Donnie Garner; infant grandson Clinton John Rayhons. Her Faith & her Family was most important to Agnes and she enjoyed all forms of contact -- in person, cards, phone calls, etc. She enjoyed crocheting, working her crossword puzzles, and whenever the chance arose, a trip to the casino. She loved going out to eat, especially going to her favorite restaurant Village Court. We take comfort in that she is now resting peacefully in God's hands.

Agnes J. (Falgitano) Garner (91) of Mason City, IA passed away on November 25, 2020 at MercyOne North Iowa Medical Center. She was surrounded by the love of her 6 daughters. A memorial service will be held in summer of 2021. Agnes was born... View Obituary & Service Information

The family of Agnes J Garner created this Life Tributes page to make it easy to share your memories.

Send flowers to the Garner family.